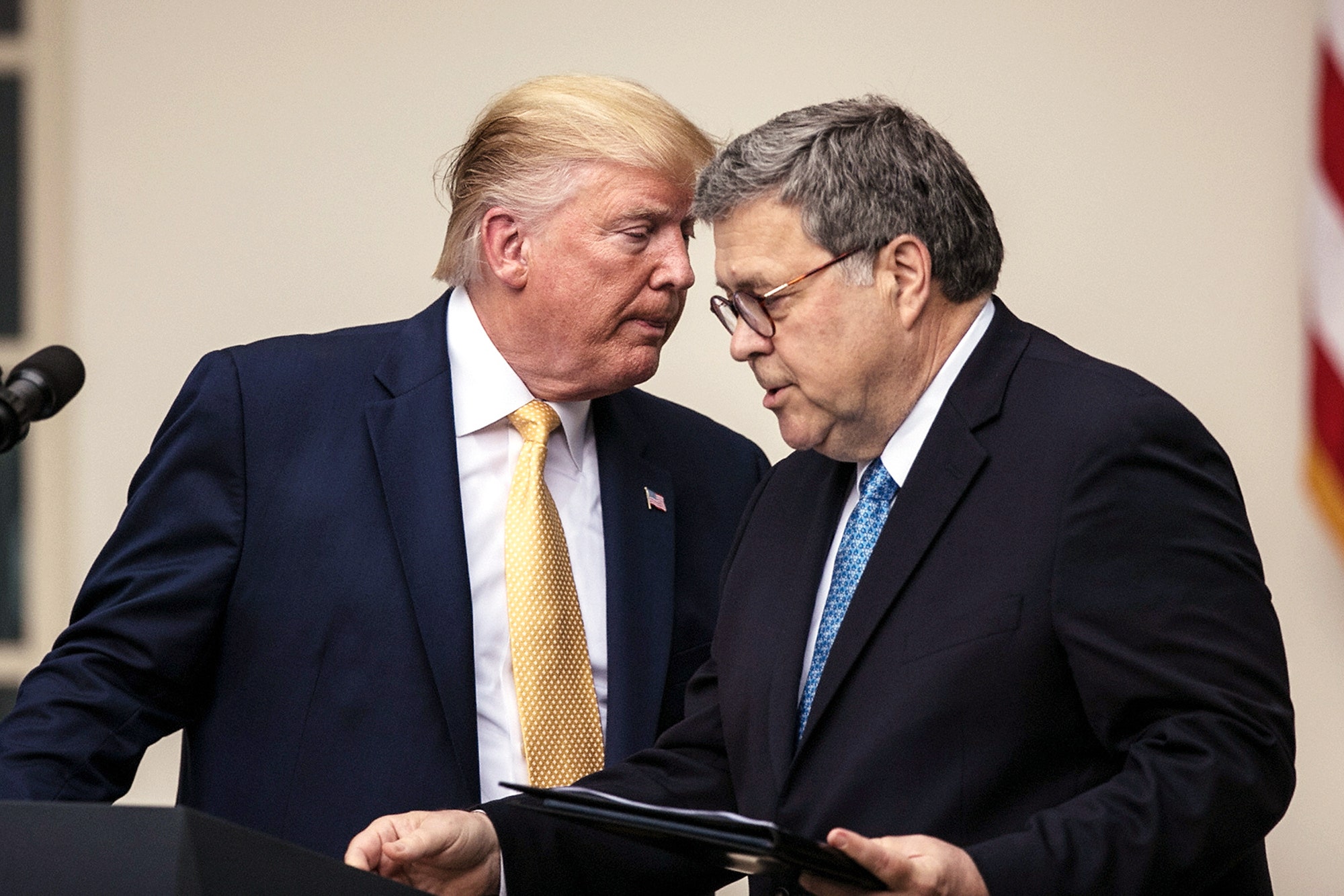 The head of the branch of the Justice Department that prosecutes election crimes resigned Monday hours after Attorney General William Barr issued a memo to federal prosecutors to investigate “specific allegations” of voter fraud before the results of the presidential race are certified.

Richard Pilger, who was director of the Election Crimes Branch of the DOJ, sent a memo to colleagues that suggested his resignation was linked to Barr’s memo, which was issued as the president’s legal team mount baseless legal challenges to the election results, alleging widespread voter fraud cost him the race.

“Having familiarized myself with the new policy and its ramifications, and in accord with the best tradition of the John C. Keeney Award for Exceptional Integrity and Professionalism (my most cherished Departmental recognition), I must regretfully resign from my role as Director of the Election Crimes Branch,” Pilger’s letter said, according to a copy obtained by NBC News.

“I have enjoyed very much working with you for over a decade to aggressively and diligently enforce federal criminal election law, policy, and practice without partisan fear or favor. I thank you for your support in that effort.”

That's a change of Justice Department policy, which had previously advised prosecutors that "overt investigative steps ordinarily should not be taken until the election in question has been concluded, its results certified, and all recounts and election contests concluded."

Barr, who's come under fire by right-wing media for not bolstering the president's evidence-free claims of widespread voter fraud in the 2020 election, declared that guidance outdated.

"Such a passive and delayed enforcement approach can result in situations in which election misconduct cannot realistically be rectified," Barr said in the memo.

NBC News and several other major media outlets projected Joe Biden the winner of the 2020 presidential election on Saturday after several states spent days counting ballots following a record turnout, including mail-in and absentee voting. Trump has refused to concede to President-elect Biden and one of his appointees in the General Services Administration has yet to sign paperwork to begin the presidential transition.

Barr was not asked or directed by the president, any lawmaker, or anyone in the White House to issue this memo to federal prosecutors, according to a Department of Justice senior official. Barr, however, met with Senate Majority Leader Mitch McConnell, R-Ky., earlier Monday. McConnell defended the president earlier Monday on the Senate floor, arguing he has a right to pursue recounts and lawsuits in court.

Barr did not respond to questions when he left McConnell’s office and a DOJ spokesperson has declined to comment on what the two men discussed.

A DOJ official told NBC News that the memo from Barr does not allege that there are substantial irregularities in the election. It authorizes local U.S. attorneys to investigate if they learn “clear and apparently-credible allegations of irregularities that, if true, could potentially impact the outcome of a federal election in an individual State.”

It added, "While serious allegations should be handled with great care, specious, speculative, fanciful or far-fetched claims should not be a basis for initiating federal inquiries. Nothing here should be taken as an indication that the Department has concluded that voting irregularities have impacted the outcome of any election." 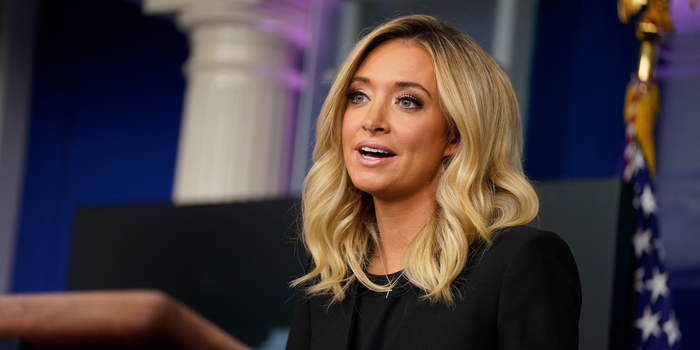 “Whoa, whoa, whoa, I just think we have to be very clear. She’s charging the other side is welcoming fraud and welcoming illegal voting,” Cavuto said, interrupting the video feed of the briefing, which McEnany said she was conducting in her “personal capacity” rather than in her official White House role. “Unless she has more details to back that up I can’t in good countenance continue showing you this. I want to make sure that maybe they do have something to back that up, but that’s an explosive charge to make — that the other side is effectively rigging and cheating.”

McEnany repeated claims by other campaign surrogates since the election to explain why Trump had not conceded his loss to Joe Biden, who has won 290 Electoral College votes to 214 for the president, according to the Associated Press, with three states too close to call. She alleged Pennsylvania election officials kept observers from the Trump campaign too far away to accurately view the counting of ballots, and attacked the state’s Supreme Court and Pennsylvania’s Secretary of State for alleged bias against Trump.

With 99 percent of the ballots counted in Pennsylvania, Biden leads Trump by more than 45,000 votes. The Associated Press called the state for Biden on Saturday, putting him over the 270 electoral votes necessary to be elected president. But Trump has refused to concede defeat and his campaign has launched multiple lawsuits in Pennsylvania and in other swing states in the hopes of overturning the results there.

“There are thousands of reports of poll watchers being intimidated and unable to do their job and as of 4:00 p.m. this afternoon, 131 affidavits have been completed just in Michigan,” McDaniel said, without explaining their significance. She mentioned a Michigan election official who, she said, came to work in a Biden t-shirt.

Pressed by reporters whether she had evidence that fraudulent votes were cast in the election, McEnany said, “Look, what we are asking for here is patience.”

So far, Sen. Majority Leader Mitch McConnell and other Republicans have signaled their approval of the Trump campaign’s legal strategy to overturn the election results.

“President Trump is 100 percent within his rights to look into allegations of irregularities and weigh his legal options,” McConnell said on the Senate floor Monday. “Let’s not have any lectures about how the president should immediately, cheerfully accept preliminary election results from the same characters who just spent four years refusing to accept the validity of the last election.”

Democratic candidate Hillary Clinton conceded the 2016 election to Donald Trump the morning after the voting, although she won the popular vote by more than two million votes, and the Obama administration began cooperating on a transition, which the Trump White House has refused to do.

McConnell met with Attorney General William Barr on Monday afternoon, and a few hours later the Associated Press reported that Barr had authorized the Justice Department to look into “substantial allegations” of voting irregularities.

With two U.S. Senate seats in Georgia to be decided in a Jan. 5 runoff election, McConnell is believed to be trying to keep Republicans in the state motivated to vote.

Republican Sens. Kelly Loeffler and David Perdue, whose seats are in danger, issued their own statement on Monday calling for Georgia’s Secretary of State Brad Raffensperger to resign.

Raffensperger, a Republican, said he was not resigning.

Not everyone in the GOP is intent on alleging that fraud explains Republican losses in Georgia and nationwide. Some, like Sen. Susan Collins, who won reelection, are content to offer President-elect Biden their congratulations.

Other Fox News broadcasters, although not the prime-time commentators and morning hosts, have also been skeptical of Trump’s claims, although not as outspoken as Cavuto. The tweet below shows what is believed to be an internal Fox News feed that was leaked to the public; the anchor, Sandra Smith, on the left side of the screen was reacting in the studio but apparently not actually on the air.

As fireworks went off and people cheered in the streets in London, the city’s mayor, Sadiq Khan, called the win “well-deserved” on Twitter. “It’s time to get back to building bridges, not walls,” Khan wrote.

Scottish First Minister Nicola Sturgeon praised future Vice President Kamala Harris’ historic ascendance: “The first woman in the White House ― and the first woman of colour too. This is a big and special moment.” Elisa Ferreira, the top European Union official from Portugal, declared that she was listening to Nina Simone’s classic “Feeling Good.”

“Congratulations, Joe Biden and Kamala Harris,” Canadian Prime Minister Justin Trudeau tweeted. “Our two countries are close friends, partners, and allies. We share a relationship that’s unique on the world stage. I’m really looking forward to working together and building on that with you both.”

America’s image abroad plummeted under Trump. A Pew Research Center survey released in September showed that the percentage of people in several countries who viewed the U.S. favorably had reached its lowest point in Pew’s nearly 20 years of asking foreigners their opinion of the U.S. In Britain, France, Germany, Japan, Canada and Australia ― all longtime allies ― only a minority of people saw the U.S. positively. Trump’s catastrophic approach to the coronavirus pandemic, which continued to kill hundreds of Americans daily as most other nations slashed their infection and fatality rates, further hurt the perception of the U.S.

For many international observers, the top concern was ultimately not whether Biden would defeat Trump, but whether democracy in America remained alive and well after a long election season during which Trump attacked the integrity of the voting process and repeatedly suggested he did not want all ballots to be counted. Trump’s dishonest, premature claim of victory on Wednesday morning won almost no support abroad, as international officials instead expressed faith in U.S. institutions and their respect for the voters’ choice.

Of course, Biden’s projected victory doesn’t mean Trump will stand down. His campaign has filed suit in multiple swing states and is arguing that various vote counts are illegitimate.

Still, the numbers in Biden’s favor allowed most onlookers in other nations to largely relax.

While decision-makers in international capitals know they won’t agree with Biden on everything, many are simply relieved to know that soon they need no longer live in fear of a sudden flip-flop by Trump on a crucial issue like U.S. troop deployments or of Trump’s personal animus toward his counterparts guiding U.S. strategy, as it did in his handling of German Chancellor Angela Merkel and Trudeau.

The president-elect’s expertise on foreign policy, drawn from his time as vice president and as chairman of the Senate Foreign Relations Committee, is also appealing to such officials, who believe he will be better equipped to understand complicated issues that Trump often minimized or misrepresented and less likely than the incumbent to fall for conspiracy theories or liesfromadversaries. And they welcome Biden’s promises to strengthen U.S. relationships with historic allies and ensure American policies better reflect the country’s stated commitment to human rights and democratic principles.

Some political figures and citizens in nations that benefited under Trump signaled their disappointment before Biden’s victory.

Ayoob Kara, a former minister in the hard-right government of Israeli Prime Minister Benjamin Netanyahu, criticized American Jews, the clear majority of whom voted for Biden as they have for Democrats for years, despite Republican attempts to smear the other party as anti-Semitic.

“I was expectings [sic] they will support President Trump who is the best American president for the State of Israel has had,” Kara tweeted on Thursday. “The ‘betrayal’ of longtime American Jews.”

In the United Arab Emirates, an autocratic state that has grown close to the White House and recently secured a long-sought major arms deal, prominent Twitter user Hassan Sajwani retweeted a commentator alleging that the U.S. election had been rigged and another Twitter user attacking the platform for its warnings about Trump’s dishonest tweets.

And in Hungary, the far-right Volner Party announced that it would organize a protest in front of the U.S. Embassy in Budapest to challenge “possible electoral fraud in the U.S. presidential election” and demonstrate “solidarity with Donald Trump.”

Those reactions were the exception to the general rule, however.

“Welcome back America!” Paris Mayor Anne Hidalgo tweeted on Saturday, noting that the win comes around the five-year anniversary of the sweeping international climate agreement signed in her city that Trump officially pulled the U.S. out of just days ago. Biden has promised to rejoin the deal immediately ― and to do even more to confront the climate crisis.