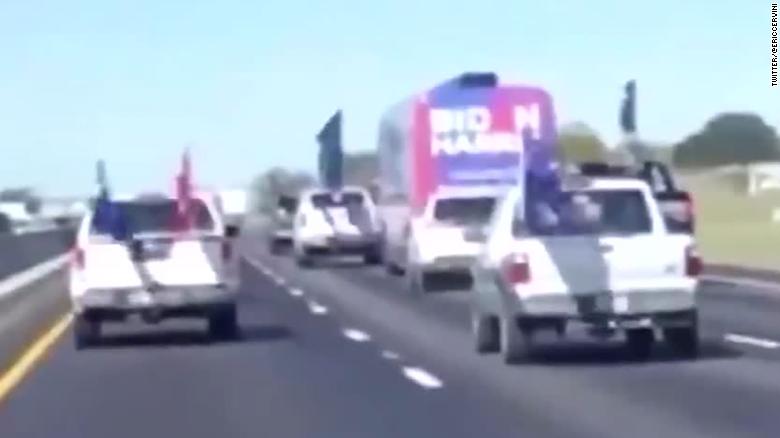 The FBI said on Sunday it was investigating an incident in which a convoy of vehicles flying flags in support of President Donald Trump's re-election bid surrounded a bus carrying campaign staff for Democratic challenger Joe Biden on a Texas highway.

Friday's incident - captured on video that was retweeted by Trump on Saturday with the message, "I LOVE TEXAS!" - prompted the Biden campaign to cancel at least two of its Texas events as Democrats accused the president of encouraging supporters to engage in acts of intimidation.

Video footage showed a swarm of pickup trucks and SUVs bearing pro-Trump flags surrounding the Biden campaign bus as it traveled north along Interstate 35 between San Antonio and Austin.

The Biden campaign said the Trump caravan tried to force the bus to slow down and to run it off the road.

One video clip aired on CNN showed a Trump-flagged pickup swerve into the side of another vehicle traveling just behind the bus. The Texas Tribune newspaper reported that the sideswiped vehicle was being driven by a Biden campaign staffer.

According to the Biden campaign, staff aboard the bus called emergency-911 to report the incident, and local law enforcement responded to the calls and assisted the bus in reaching its destination.

"FBI San Antonio is aware of the incident and investigating," special agent Michelle Lee, a spokeswoman for the Federal Bureau of Investigation in San Antonio, told Reuters in an email. "No further information is available at this time."

During a campaign stop in Michigan earlier in the day, Trump said: "Did you see our people yesterday? They were protecting his bus."

Speaking about the incident on the campaign trail on Sunday in Philadelphia, Biden said: "We've never had anything like this. At least we've never had a president who thinks it's a good thing."

Neither Biden nor his running mate, Senator Kamala Harris, was aboard the bus. The Texas Tribune reported that its passengers included Democratic U.S. House of Representatives candidate and former Texas state Senator Wendy Davis.

The highway confrontation came as polls showed an unexpectedly tight race between Biden and Trump in Texas, which has long been a Republican stronghold.

"Rather than engage in productive conversation about the drastically different visions that Joe Biden and Donald Trump have for our country, Trump supporters in Texas instead decided to put our staff, surrogates, supporters and others in harm's way," Biden's Texas campaign spokesman, Tariq Thowfeek, said in a statement. "We'll see you on November 3rd."

Texas was not the only place where "Trump trains" of supporters forming vehicle convoys have caused consternation. Video footage on social media on Sunday showed vehicles flying pro-Trump flags blocking traffic on the Whitestone Bridge over the East River in New York City's Bronx borough.