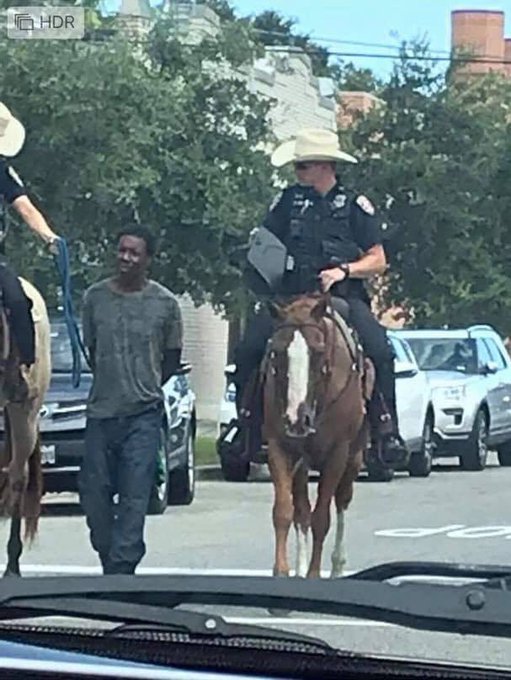 The Galveston Police Department issued an official apology for any “unnecessary embarrassment” caused by the incident.

The Galveston Police Department issued an apology on Monday evening after an image was circulated on social media showing two mounted officers, both white, leading a handcuffed black man behind their horses, attached by what looked like a rope or leash.

Adrienne Bell, a Democratic candidate running for Congress in Texas’ 14th District, posted the image to Facebook, saying the scene had invoked “anger, disgust and questions from the community.”

In a press release posted on Facebook Monday, the police department identified the suspect as Donald Neely. He was arrested for trespassing on Saturday, and a transportation unit was not immediately available at the time of the arrest so the officers escorted him to the Mounted Patrol Unit staging area in this manner.

The department acknowledged that the incident may have been “unnecessarily” embarrassing for Neely and apologized for the poor judgment of mounted officers P. Brosch and A. Smith.

“We understand the negative perception of this action and believe it is most appropriate to cease the use of this technique. The Police Chief has taken immediate action to suspend this technique of transportation during arrests,” the release stated.

The release also sought to clarify that Neely was not detained by a rope tied to his hands, but a “line clipped to the handcuffs.”

People on social media expressed disgust at the incident, calling it dehumanizing, unacceptable and reprehensible.